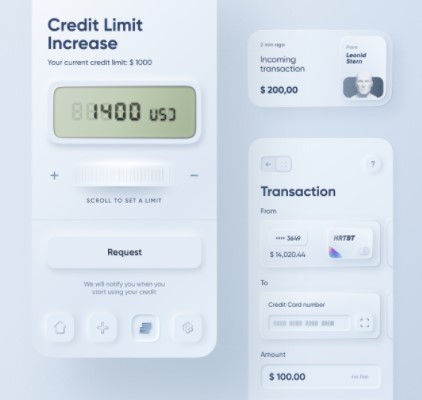 User Interface and Experience has long grown past the solitary aspect of aesthetic appeal. Nowadays, curating a groundbreaking User Experience requires you to pay utmost attention to cogent UI design aspects, such as:

To this effect, a design trend that is on everyone’s radar today is Neumorphism. Neumorphism is a Soft UI design concept, as recent as December 2019. However, the foundations of this style lie in reprising the best elements of contemporary and yester-year UI design trends. The question is- What is so fascinating about Neumorphic UI design that has the entire design community abuzz?

The Roots of Neumorphism

Almost 40 years ago, Apple introduced Skeuomorphic Design. They wanted to offer a UI design that mimicked 3D realism, using a vibrant color palette, hyper-realistic shapes, shadows & surfaces, and interfaces & iconography with reflective visual qualities, e.g., the calculator in the picture below. Between late-2000’s and the early-2010’s, both Microsoft and Apple began releasing products that boasted of a newer UI design format- Flat UI design. The flat style of UI design was both in theory and practice, a complete 180-turnaround from the tropes of rich Skeuomorphic design. It incorporated either monochromatic or contrasting color palettes, drop shadows for depth between background-foreground elements,  and iconography that accentuated 2D, flat interface design.

The birth of Neumorphism literally occurred in front of the eyes of the online design community, when UI UX pundit Michal Malewicz presented the concept of ‘New-Skeuomorphism’ in UI design, and Jason Kelley coined it as ‘Neu-o-morphism’. Designers and UI experts alike were amazed at how Neumorphism retained the visual softness of Flat UI and infused it with 3D-styled physical elements. The design community which was already looking for a way to combine the best of what Skeuomorphic and Flat design had to offer, wholeheartedly embraced Neumorphism.

In the US, every 2 out of 3 minutes the average user spends online is via a mobile platform. It necessitates designers to exercise greater focus on mobile app UI design than desktop platforms, if not more! Which raises the question- Does Neumorphic UI design truly benefit the user, and you in terms of user engagement?

For that, we must start by comparing the principles of Neumorphic design to that of its contemporaries and surmise what benefits it has to offer.

Numerous debates have already been staged on the viability of Neumorphic UI design not just for desktop apps, but for next-generation mobile devices running iOS, Android, or Windows. Your website UI design needs to be mobile-optimized as well, otherwise, you stand losing more than half your chances of user engagement. 85% of adult users want a better or equal quality of UX on a mobile website, than its desktop counterpart, and are 5 times more likely to abandon the task due to lack of mobile optimization. So, how much of a positive difference can Neumorphism bring to your user engagement? Well, Neumorphic design imbibes the best qualities from both Flat UI and Skeuomorphic UI design. The iconography, typography, and interface layers still offer a minimalist aesthetic, but it presents a UX that creates a perception of 3D interactivity.

The following points successfully summarize how Neumorphism grants a resourceful design methodology and an engaging UX for software users:

Neumorphic designs generally use monochromatic color palettes for both the background and the interactable elements like buttons, switches, progress bars, etc. A combination of inner and outer shadows are used to achieve a color gradient, giving the elements a raised, extruded look, as in a 3D projection, instead of floating above the background as in Flat UI designs.

Hence, the user enjoys a soft UI, while using a 3D-interactable UI. It is fairly easy to produce such a Neumorphic design on any design software- like Adobe XD. You can even achieve a Neumorphic layout for web applications using CSS code.

Neumorphism is mostly monochromatic as mentioned before, but you can still design buttons, icons, and switches in different colors to ensure that a low contrast level does not mar visibility and impede user accessibility. The contrast and shadow levels create the impression that the interactable element is still a part of the background- a sense of realism that’s a throwback to Skeuomorphism, e.g.:

To make your buttons life-like you can use high contrasting colors to depict user interactions, as long as the color choices do not hurt the design. Thus, designers do not have to experiment too much before they can settle on a color scheme that catches the user’s attention without being too flashy!

Neumorphic design will impress the user as long as you are using contrasts, shadows, and highlights effectively and visibly depicting effects/state changes when the user interacts with the UI elements (buttons, switches, cards, etc.). As is evident from the image below, Neumorphic UI design scores on visibility and accessibility as long as the contrast and shadow levels are communicated to the user legibly.

Therefore, Neumorphic UI design is adaptable to both dark and bright color palettes, provided that there is a depth perception in the contrast and shadow levels between the interactable element and background surfaces.

Neumorphic design follows design conventions that have been cumulatively around for decades. There are very few parameters for designers to worry about when whipping up such a UI. Hence, it is quite easy for designers to efficiently and rapidly prototype Neumorphic UI designs for any kind of application or website.

Shifting your site or app UI to a Neumorphic format is not a guarantee of successful user engagement and good ROI. Although, low accessibility or visibility issues with UX turn away at least 88% users from your site/app; poor UI performance turns away a good 90% of your users. So, it is essential to pick and choose use cases where a Neumorphic design is bound to benefit you.

Bridging the User and the Interface

Your app website UI can lose more than half your chances of user engagement if it fails to bridge the gap between the UI and the user and engender a productive app usage experience. A design style’s true test lies in the affordances it can grant to the users. Affordances are how a user interacts with any digital product. A Neumorphic UI blurs the line between a digital application’s affordances and that of its real-life counterpart, e.g. a Neumorphic torch or calculator UI.

So, you can actually have greater control over the level of 3D realism when you combine a Neumorphic design with the right kind of transition/effect for creating an impression on the user. Neumorphism allows you to choose among beveled, pressed, and/or extruded element stage changes to convey a UX that feels more familiar, and life-like. Thus, what often gets lost in translation with other UI styles, is much more straightforward with a Neumorphic UI, and its Skeuomorphic ability to incorporate realism.

By now, you have surely realized that Neumorphic UIs introduce intuitive design nuances by simple methods. Neumorphism may be less than a year old, but it already has many proponents in the design community who have numerous examples, tutorials, and design component libraries among other resources that can spearhead the design prototyping.

So, a Neumorphic UI can step up to the plate when you need to wireframe and design the prototype without much time to spare. An easily implemented UI design paves the way for completion ahead of timescale. In a market where every $1 invested in a bankable UX idea can assure a proportional ROI of $100, you stand a lot to gain by opting for a design plan that fast-tracks your time-to-market.

So, does a Neumorphic UI offer your users a positive UX? Does it promise you a manifold ROI if you facelift your erstwhile website/app UI or implement a Neumorphic UI design for your new software?

A Neumorphic UI can help with the marketability of your app or site, provided the design is executed with care. The marketability and user engagement of a website or an app relies heavily on the mobile-responsiveness and accessibility of its UI design. So, the key to such a successful Neumorphic design is all-encompassing accessibility for the user. An efficient Neumorphic UI may not even need to rely on typography!

Thus, a Neuromorphic UI can give your software a competitive edge in the market and offer manifolds ROI on the UI design. Apple and Microsoft are already embracing a soft UI design style with ‘new-Skeuomorphic’ UX curation, with a little experimentation and effort, your app can hit the nail on the head too!

Tempest House places at your disposal a team of highly experienced UI UX experts who can provide skilled Neumorphic software design services for modern software builds. To book a free consulting session, do so here